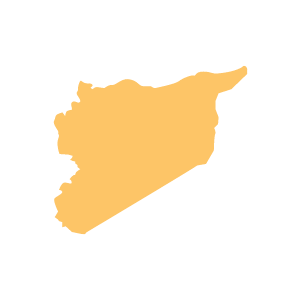 This week marks the sixth and final week of Lent. Our final prayer focus has asked us not to share his story on social media or our blog. Instead, this week, we would love for you to pray for the woman written about in the blog post below, written by one of our volunteers, who wishes to remain anonymous. Please read further, for the faith of the woman in the post is amazing. But she also needs to be covered in prayer.
—

On March 7, 2019, in a small room in Damascus, Take Heart servants interviewed Vassa*, a Syrian woman in her early thirties and a victim of the devastating Syrian War. Digging deeper, she is also a survivor of domestic violence and religious oppression. Vassa, who still covers her hair with a veil, as is expected of Muslim women, was baptized behind closed doors and confesses her love for Christ with zealous conviction and a firm heart.

Despite her Islamic upbringing, she felt an inexplicable desire to attend church ever since she was 15 years old. Like many in her village, Vassa was married at a young age. She is a mother of two shy, but undoubtedly full of life, 4 and 9-year-old girls. Her husband, a well-connected soldier, responded to the ailments of war by turning to drugs and alcohol. He condemned Vassa for giving birth to girls and was further infuriated by her interest in Christianity. With horrific violence, he conveyed his disdain for Vassa. He repeatedly emotionally and verbally abused her; at times he held a knife to her throat, and at other times he burned her face with the food she had lovingly prepared for him. On one occasion, he broke Vassa’s arm, and she endured days of excruciating pain, only seeking medical assistance at the behest of her parents. He raped her when he wished and brought other women home when he wished, forcing her to wait outside of her own home. While suppressing her emotions and fighting back tears, Vassa recounted many more incidents of abuse and pointed to her face where 24 stitches served as a permanent reminder of what her broken marriage entailed.

For years, Vassa was afraid to turn to anyone and suffered alone and in silence. As the violence began to escalate toward her treasured daughters, she sought the loving refuge of the church — the only place where she felt shielded from all harm. She immersed herself in biblical readings and church services, hungry for the living Word. In a marriage void of love and a war-torn region bent on stealing all hope from her life, Vassa endured and preserved. She gained the strength to leave her husband and was a short time after baptized along with her daughters. Since then, she has sought Christ as her healer, her protector, and the true father to her daughters.

Sitting inches from this young woman who faced war, oppression, abuse, rape, and humiliation, I was reminded of the verse, “My grace is sufficient for you, for my power is made perfect in weakness.” (See 2 Corinthians 12:9.)

In her pain, God called out to Vassa, comforting and strengthening her. Vassa and her two angels survived in Christ, through Christ.

Christ who took the form of a bondservant and permitted His own creation to humiliate and oppress Him to the point of death on the cross, is no stranger to pain. He perfects His strength in His children and tends to the wounds of all those who suffer but press on in their spiritual growth and for the love that never dies — the love of the crucified and the resurrected, our Savior.

God is in the midst of her; she shall not be moved;God will help her when morning dawns. – Psalm 46:5

“God whispers to us in our pleasures, speaks in our conscience, but shouts in our pain: it is His megaphone to rouse a deaf world.” – C. S. Lewis, “The Problem of Pain”

*We have changed her name for her protection.